As we pulled our mud-caked vehicle alongside the twilight outline of the Flintstone’s Cave hostel in Goreme, Cappadocia we were greeted by welcoming staff and a few friendly Erasmus students.

“Looks like you’ve had fun, what have you been up to?” one enquired.

It would be a few days before the obscure images of the past 24 hours had cleared from our eyes enough to answer that question.

Millions of years ago in Cappadocia, a volcanic eruption or two left this desert region strewn with thousands of slabs of igneous rock. Subsequently the sandstone beneath has been eroded by wind and rain creating a dramatic landscape. Long serpentine gullies sweep around basalt capped golden towers. Lofty plateaus frame a striking scene that is littered with ancient dwellings cut directly into the stone by Troglodyte tribes first and Romans after them. In the warm wind we explored the hills and valleys of this fairytale land. Christian imagery remains intact on the walls of Byzantine churches cut from the soaring towers. Thousands of Christians evaded Roman (and later Turkish) persecution here in vast underground cities. The centurion tasked with flushing out the Christians from these five story bunkers would have had to evade traps such as giant rolling rocks and fallingspears. We spent hours exploring tunnels and chambers, playing out scenes from Indiana Jones and generally larking about.

We left Cappadocia wanting to stay longer but our ferry from South East Turkey was imminent. We roared through the hills east of Iskenderun passing tiny sepia villages, unreal in the glow of scant halogen lamps. We smashed the delicate silence of each town into clattering shards, barking and yelping in our wake. As we awaited unpopulated countryside in which to camp Bas stirred from reflection, “how far do you think we are from the Syrian border?” Somehow it at not occurred to us until that point that, as we flashed through the hills, we were fast encroaching on the disputed Turkish-Syrian border. The mood in the car sharpened and the quest for a camp received new urgency.

Eventually we found our way to the top of a bare hill under gathering clouds. We decided that while it was perhaps unwise to park on a hill in an electrical storm pressing further and bumping into Syrian revolutionaries, the Syrian Army or being mistaken by the Turkish army for either of the above was less appealing. That night our dreams were troubled by phantom conflicts between Turkey and Syria played out in the crack and boom of the storm.

We awoke at dawn to a tap tap on the window and the face of a Turkish farmer peering in. The hilltop on which we had narrowly escaped electrocution and an international incident was revealed in the light of day to be an enormous field of parsley. Like surly adolescents we tramped out of the car to receive our reprimand from an appropriately furious farmer. This did not unfold. In fact the farmer seemed heartily amused by the novelty of finding a Land Rover and three bewildered tourists lost in his parsley. After much awkward laughter, manly backslapping and handshaking we were allowed on our way with a generous gift from our host.

We arrived at the port of Iskenderun by 9 o’clock. After a quick breakfast of parsley sandwiches we registered and parked to await our passage to Africa, the Nisos Rodos. We were to depart at midday. By midnight we had started uploading, things were already starting to feel a bit more like Africa.

After a pleasant 24 hours aboard we were downloaded to Port Said, Egypt. Muted by excitement we took our first breaths of African air as the shadow of our car rolled off the ferry. Our tiny vehicle was lost in a mechanized jungle looming black around us. Monstrous grabbers, lifters and haulers were cut out in monochrome by our stark spotlights. Men with uniforms shuffled out of the gloom, we were not going anywhere until morning. They lead us to a locked compound where we were left for the night.

We cast about. Our new home consisted of a large rectangle marked out by razor wire. The ground was made up of years of compacted grime and leaked lubricants resulting in a nonspecific sticky filth. The compound was inhabited only by a handful of lorry drivers sleeping in their cabs. In the far corner was a single dilapidated toilet cubicle. Inside, a steel showerhead hung from the cracked concrete wall over a squat toilet that could have equally been the drain in an abattoir.

There are none as optimistic as the desperate. We looked at each other, “It’s just one night…it will be fine”. Ravenous, we set about making some food. As I chopped the parsley I watched a skeletal cat sizing up a rodent across the compound. Little red eyes glared back at the predator with unsettling hostility. Gripped by this tiny war I almost didn’t notice the hunched figure that stepped silently from shadows behind. As the outline of a man walked slowly towards our car Rich put his hand on my shoulder and I turned to see a pair of sallow eyes my window. Startled, I locked the door. Several more tenebrous shapes gathered around and began exploring our car with there pallid fingers. Growing numbers gave the spectres confidence and they started speaking to us. “What you doing here, my friend?” choked forth the first. “Nisos Rodos” Bas managed and was met with a chorus of whispered echoes. The first croaked again, “you need anything, my friend?” ruthlessly dragging on the words, “you wan’ beercig’retteshashish?”

“We don’t need anything thank you” Rich stated firmly. The potbellied leader pressed his cracked lips then smiled. “We come back tomorrow, maybe you need something tomorrow” the misshapen bodies slowly melted away. We went to sleep uneasy. 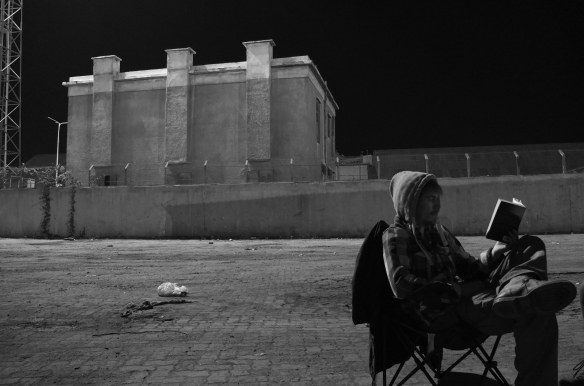 The next day we were up early, keen to sort our paperwork and escape this dreadful oubliette without any delay. Guided by our excellent translator/fixer, Mahmut, Rich made his way through 11 offices. Each office housed a slightly fatter man in a slightly sweatier shirt than the last. Rich financed progressively bigger bribes and in return inky stamps endorsed certificates proving all manner of things. Nothing inspires confidence like a large illegible rubber stamp. A bureaucratic tradition left over from the time of Empire, perhaps. All was developing well until one such clammy colossus clawed in his nose and, when satisfied with his findings, shot the same chubby digit at an assistant dispatching him to check our chassis number.

This was a catastrophe we had been hoping to avoid. Our chassis number has been previously galvanized over leaving us with no proof that our car is the same as the vehicle that our registration document discusses and not a stolen one. Luckily this problem was managed in a distinctly Egyptian way. Mahmut phoned his friend Mohammed who soon arrived and knocked the chassis number in with a chisel. Despite Mohammed’s skilled workmanship we held reservations about our being able to convince the border guards of the legitimacy of our forged chassis number on account of it’s being written in Arabic lettering.

These delays resulted in two more nights spent in purgatory. The long hours were passed predominantly trying not to touch anything and periodically batting away probing interest from the vermin and the pushers. On the morning of the fourth day we tried the gate. Mahmut conversed with the officer while we sat in our idling vehicle. The guard surveyed us over the mountain of forms, stamped in triplicate, skillfully devouring salted sunflower seeds as he did so, spitting a cloud of chaff after each one. He ambled lazily over and asked to see the chassis number. Rich mumbled something and pointed. The officer peered into the darkness under our wheel arch. He peered for too long, something was wrong. Mahmut was perspiring. Suddenly he darted around the car and, concealed by his body, mashed a wad of notes into an expectant hand. Stony faced, the officer completed his checks and walked back to his office in silence. In the dense heat we waited.  Minutes ticked past and nobody spoke. The barrier creaked and lifted; we held our breath unwilling to leave without confirmation of success. Mahmut flicked his hand impatiently and we crept out onto the road. Free. We gathered speed on the road to Cairo and began to celebrate. We jigged about boisterously in our seats and all the tension poured out to the tune of “Free falling” by Tom Petty. We were out, and with a full tank of diesel for a tenner we were on the road to Cairo.