In 1952, over the oasis town of Siwa, it rained for three hours. In this unprecedented deluge, the entire mud-brick town dissolved back into the desert. Surprised but unperturbed, the inhabitants, using the technique of their grandfathers, re-built the town as it stands today.

Our stay in the super-city of Cairo was drawing to a close. This conurbation of old and current capitals from passing empires, sprawling across the populous delta, holds 20 million people. It is growing at around one million a year, consuming the fertile topsoil for bricks and covering over the farmland. The Nile, which has always defined Egypt’s fate is being driven harder, like an uncomplaining pack-mule.

The big, bleak picture aside, the inhabitants make Cairo as pleasant as it could be. Between the great flyovers and bridges, an easy-going attitude prevails over day-to-day life. This was quite surprising considering the great turmoil that was unfolding on the news. We were welcomed and included into the slow traipse of hawking, haggling, tea-drinking and sitting around. The continuous stock ‘civil disorder’ snapshots had been very effective and we were alone as travellers in a country that depends heavily on tourism. Dejected Nile cruise-boats moored up along the banks, Hotel staff sat, hopeful in bowties and waistcoats and the empty halls of Egyptian museum echoed with the sounds of protest outside.

For me Egypt proved bigger, poorer and heartier than the troubled new Arab-republic I had imagined. Of course, in areas such as the pyramids, we were seen only as a source of cash. We hit these gauntlets headlong, within a defensive bubble, closed to the touts’ cunning gambits. Away from these magnificent tourist traps however, we found the Egyptians had an incorrigible welcoming streak which the troubled times and the abandonment of outsiders had amplified. The lines between business and friendship were completely blurred and the uncertain mixture of hospitality and sales-ploy took a great deal of getting used to. However to remain closed and untrusting is to remain an outsider. Although our friends occasionally lead us into a perfume shop or offered us desert trips, local crafts or hash in convoluted adventures, the majority were happy to sit and share ideas. The one golden rule is not to trust any directions. The people we met were so genuinely keen to help that to admit they didn’t know the way was out of the question. Whilst looking for a hostel, we were confidently pointed in every direction around Cairo for two hours before returning to where we had parked to find the hotel by chance, next to the car.

One night, we found ourselves hopelessly lost amongst dust roads and block houses, searching for the pyramids of Saqara, where we naively hoped to camp. Whilst dithering around a locked gate we were picked up by Mohammed, on holiday to visit his family. He worked as a horse-boy in Sharm-el-Sheik, taking wealthy Russians riding around the dunes. We were tired and suspicious of his enthusiastic offer to take us in, but he persevered. It was the right decision to follow him. That night, after a meal with his family, we sat around a fire on top of a rocky mound of tombs. In the dark, the shadows of the Saqaran pyramids hunched to our South with the otherworldly suggestion of the great pyramids of Giza far to our North.  Six men in heavy robes and casually slung guns, guardians of the ancient site, approached us with foreboding. The leader, distinguished as such by the richest and curliest moustache, stepped forward to investigate. He was at ease by the local boy and after a discussion with the second most magnificent moustache, allowed his troop to join the camp. Our unlikely group sat in a circle far above the encroaching houses drinking tea, swapping cigarettes and comparing facial hair into the small hours.

The legacy of millennia, casually evident among the muddle, is all the more impressive considering how Egypt consumes the past. What the all-swallowing desert spared of the overlapping palaces, pillars and towering deities, was exposed to the population, creeping, and tearing like vines; inhabiting and borrowing from the mysterious rubble. Then came the iconoclasts, the chisels of jealous pharaohs and the purge of the new religions. Eventually however, the Christian plaster and Arabic paint peel and crack to reveal the sharp hieroglyphs. Fearful armies and even Napoleon’s cannon have yet failed to tear down the pyramids. Each new captor forces their fleeting mark and is assimilated into the great organic permanency of the Nile people.

In the pleasant suburb of Ma’adi we met a man who would open up the desert for us: Sam, a British ex-pat who among other things, drove a defender and wrote for Land Rover Owner International. As luck would have it, he was planning a weekend expedition into the Western Desert and needed a second vehicle. Among the proposed objectives, Sam proposed descending an escarpment, crossing the Gebel Guhannim dunes toward the al Faiyum Oasis. En route and driving out to the Whale Bone Valley, Sam had offered the Regimental Society of Great Britain to build a memorial cairn for the 1st demolition brigade (known as Popski’s private army after their Belgian commander), who had trained on the challenging terrain with the SAS before engaging Rommel. This plan was explained to us in front of a wall size aviator’s map over several beers. We tried to remain collected and disguise our excitement.

There are two borders that define the nation of Egypt: The political; unbending concepts far out beyond the horizon; and the actual; the distinct point where the narrow, Nile-fed band of living jade suddenly stops. From here you walk out a hundred paces onto a landscape where civilisation is impossible and sustained life a masterpiece of centuries. From here you could be in Libya, the Sudan or 100 miles from the Atlantic Ocean. You have already crossed the border to where the only distance that really matters is determined by your water and fuel supply.

Having departed Cairo at crack of dawn our convoy joined the clear desert road. Hours of flat gravel were interspersed with the occasional flame of an oil refinery. At a point where the map seemed blank of features, we turned off the road. This experience in itself was liberating; the sudden realisation that one is not confined to the road but can drive freely across the infinite landscape. We followed our lead vehicle for the morning, navigating over soft sand drifts and an increasingly rocky terrain. Our car buried itself in a sand drift to the axel and span hopelessly. Sam advised us to drop the tire pressures and we were amazed to watch our car float off over the sand. Eventually we reached the escarpment.

The patchy, clouds cast a net of silver shafts, scanning over the near and distant layers of rock. The land sunk down to the oasis depression twenty miles away and then chased off into the vanishing Sahara. We found a spot that surveyed this great vista to build the cairn. The two dusty Landrovers, perched on the edge and tiny under the sky, easily evoked the great era of desert exploration. We spared a moment to remember the men who had fought across this landscape, hostile and huge.  By midday our efforts were completed and it was time to descend.

The escarpment was formed of five flat strata with sheer slopes of sand and scree. To drop to the next level, we had to scout out a suitable slope before lining up and plunging down. The edge would disappear under the bonnet and for a lengthy second only the sky and the far horizon would fill the windscreen before the car would tilt and lurch forward. As long as the line was straight, the drifts of sand would slow the momentum. Then we would strafe along the face searching for another drop point.

After descending the final level, we drove for hours across the dudes to a flat expanse covered in fossilised disks, smooth and glaring in the afternoon sun. Throughout the Cretaceous and Eocene eras, the Sahara was a great shallow sea, rich in life. We were headed for a valley where the soft chalk was gradually revealing its secrets. Hundreds of skeletons of ancient sharks, sea cows and pre-historic whales are meticulously brushed free by the winds. We walked the course of petrified mangroves, ladders of vertebra contorted into spirals, serrated jaws and hind legs on their ancestral road to becoming fins. The bones lay in piles on the sand or gradually emerged from the rock face. The sun set as we left the valley silent and still. 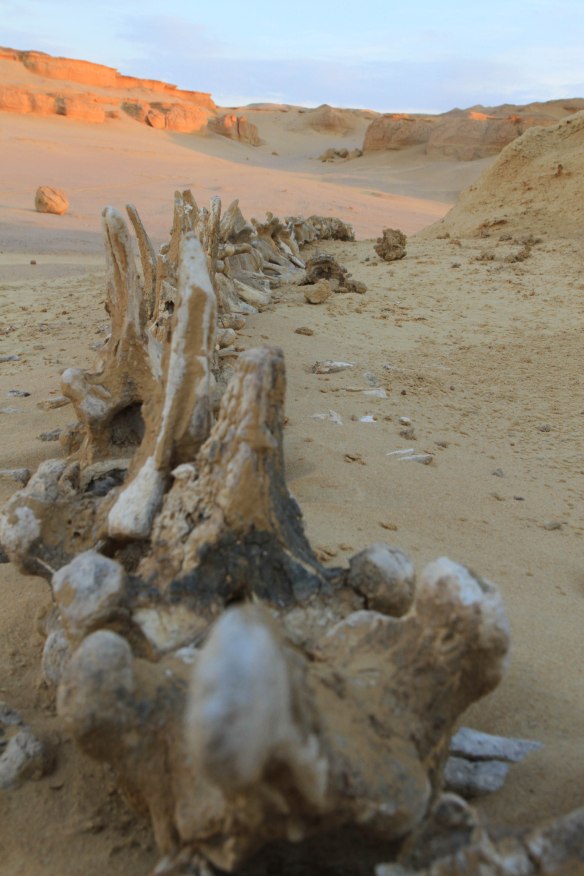