We decided to drive the Oasis road, looping for 800 miles west, away from the Nile, rejoining it at ancient Luxor. Diesel was a big problem. The country was virtually dry due to the conflict inhibiting trade. To avoid the day-long queues of lorries, one had to turn to the black market. Fortunately, Sam had a contact, Badri, a local Bedouin, in the oasis of Baharia, who would arrange for onward fuel. The fact that diesel was three times the price on the black market vexed us little as this brought it up to 33p a litre.

Before we left Cairo we were able to have lunch with Enrique, a Spanish journalist fresh from the pre-referendum interviews. The country was poised to vote on a new constitution. Essentially it would decide if the country’s laws would be based on the Holy Qur’an and whether the judiciary would be able to overrule the president. Divisions were running deep in a country fresh to democracy and there seemed no question of compromise. More organised and with the mosques as a platform, Morsi and the Muslim Brotherhood looked poised for a successful ‘yes’ vote.

Thus began our days driving the dot-to-dot of oases. We crossed the sharp border away from the dense, living Nile. We crossed over to where the only sign that anything lives, or has ever lived, is the shimmering asphalt. That evening we killed the engine to make camp. Our ears rang with silence.

The Western (Libyan) desert is impossibly dry but deep beneath lies a fossil sea, ‘the aquifer’. Water can be tapped where the land recedes below sea level. Today diesel-powered pumps provide ‘unlimited’ water for the networks of villages and farms in each basin. Nobody knows the origin or limits of this mysterious underground sea and the oasis people are not the only ones pumping. A thousand miles west in Libya, ‘Gadaffi’s Underground River’ pipes untold gallons away to the coastal settlements, on a much larger scale. It is no surprise that many believe the future wars of Africa, will be fought over water.

A night’s camp and a day’s drive on a good road brought us down into the flat basin of Baharia. Here we met Badri, friendly and serene, for a late lunch. Sure enough he had arranged for 100 litres of diesel. We filtered it into our car and jerry cans to remove the water, which is often added by Egypt’s ‘businessmen’, to bulk out the sale. This time, we found it to be of excellent quality. Pressing on, we made it out, over the lip of the depression and were once more alone to watch the sun set. That night’s camp was a particularly jovial one as we sat around a roaring fire under an appropriate crescent moon drinking Saqara lager and singing.

The next day we reached the White Desert, miles of wind-cut, blinding chalk. Stacks of rock had been preened by a titanic topagiarist into mushrooms, rabbits and other shapes that, were we all not so pure of thought, could be interpreted in a suggestive manner. We left the car and wandered like liliputians in a madman’s garden until the heat drove us back. 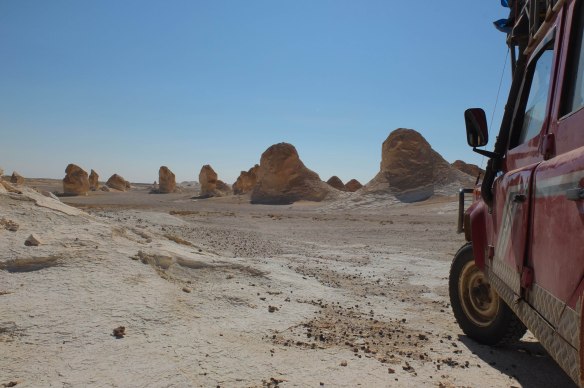 The Oasis of Farafra, where we headed next, is the remotest bead on the bracelet, perched on the edge of the Great Sand Sea. Here another friendly face awaited our arrival. Juan, a friend of my uncle, had moved from Spain a few years ago to set up a hotel on the peaceful frontier. The mud-brick hotel was not yet ready and the situation back in Cairo meant few people were passing through. We pulled up at the gateway and were warmly received.

The hotel was the last building before the great sea. We had lunch in a shady, blooming garden. Supply lines were unpredictable and Juan received most of his food freshly grown and local from the Bedouin. We talked about the easy, interdependent community he had been welcomed into, of water pumps and of the summer when everyone lives and works at night to avoid the deadly heat. Our voices were pure in the silence, the void behind us absorbing all sound. Beyond the tended garden we walked out, barefoot in the late afternoon sun. The Oasis seemed like a raft, temporarily granted life on a calm ocean, serenely bobbing near an unfathomable shelf.

We spent a further two days in the desert, driving, climbing to vantage points and charging down the dunes. Other cars or people were rare enough to warrant comment whenever they occurred. We finished each other’s sentences, chuckled over long-running jokes and argued bitterly over which way north was or how best to divide the remaining jam. I feel sorry for the next people to travel with us.

Our struggle with the Egyptian institutions continued as we drove through overstaffed, isolated checkpoints. As early as the Old Kingdom, Egypt had developed a centrally organised system that could accurately forecast crop yields, co-ordinate labour and calculate taxation. In short, the Egyptians invented bureaucracy. The hundreds of lavish tombs of scribes with titles such as ‘overseer of the harvest’ or ‘commissioner of art’ implied that taking advantage of an official position was not a new concept. Even now an entire section of society still depends on checking, stamping and low-level backsheesh. This, coupled with the ‘Inshalla’ mentality (literally “if Allah wills it” but actually meaning anything from “possibly” to “yeah right”) means that everything in Egypt tends to take a long time.

Another two jerry cans of backstreet diesel brought us late one night into Luxor. We blinked, wide-eyed and dusty at the lights. Accustomed to the peace of the desert, we were overwhelmed by the milling street crowds in long robes and the stampeding traffic. We escaped into a hotel for a much needed shower. 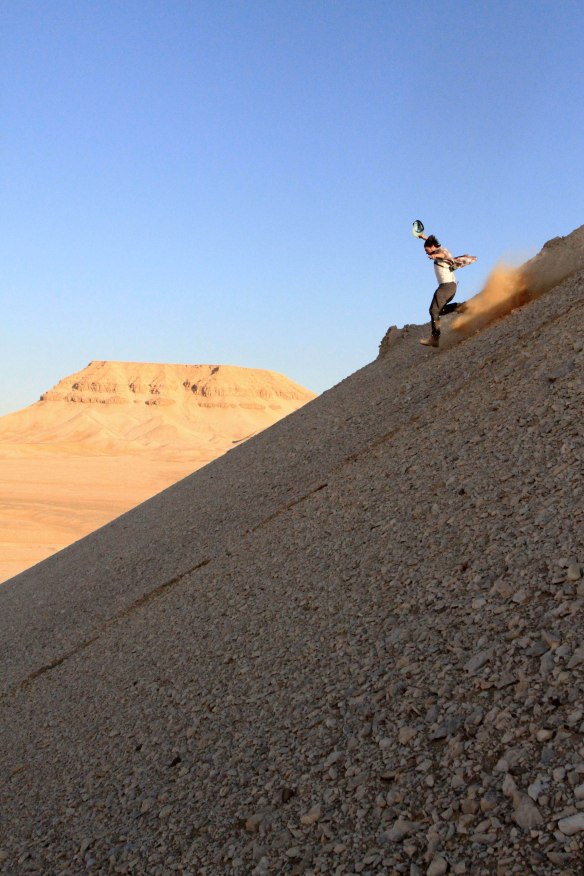 Running away with it!

Luxor is a whirling rush of living streets, merging under the great temples of the New Kingdom (relatively new, this cluster of dynasties is still over three thousand years old). A parade of markets and vendors vied for our custom as we walked to the centre. Here we were granted a glimpse of Ancient Egypt at its height. Again, there were almost no tourists. Before we left for Aswan, we crossed over the river to spend the day in the Valley of the Kings, once hidden, high in the escarpment. The tumbling necropolis and network of deep, painted tombs was preserved to the point of defying time completely.

The weekly ferry for Sudan was pressing us on. We left Luxor and headed on up the Nile for Aswan and the old Kingdom of Nubia.