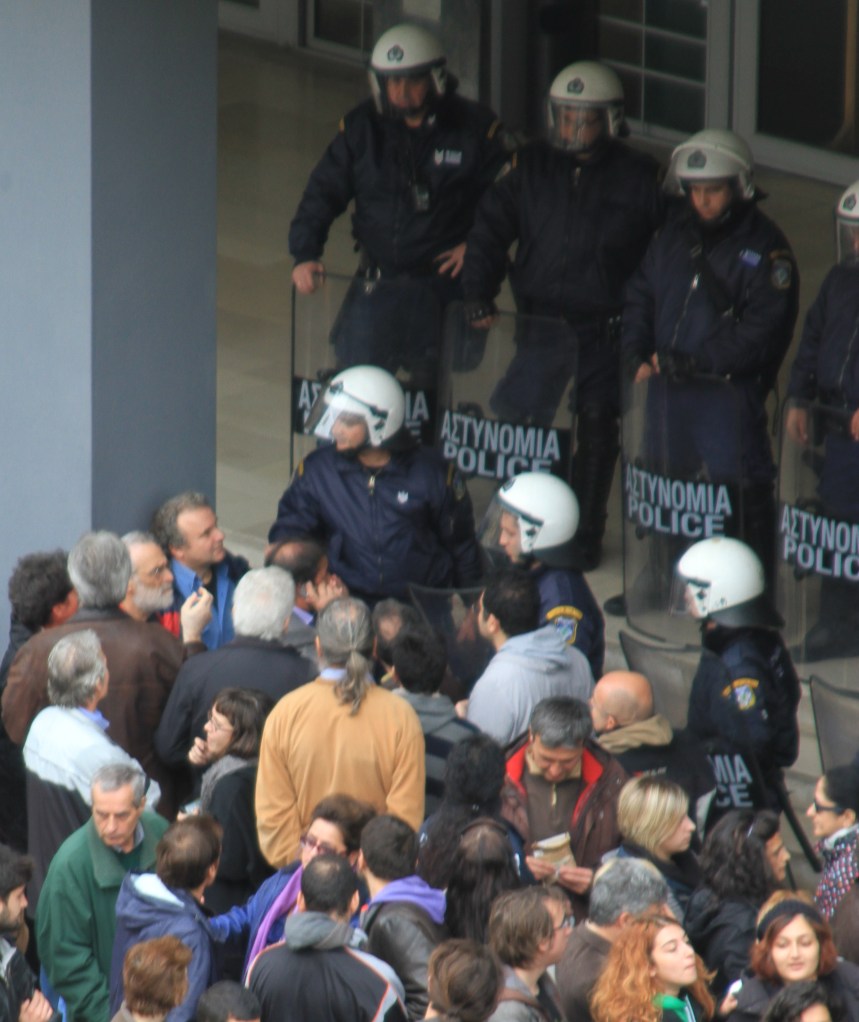 It was with a reluctant parting of eyelids and a woollen head that I surfaced. My slumber had been prematurely interrupted by shouted chants and sounds of a ruckus in the street below. I stumbled woodenly to the open window, squinting in the sharp morning sunlight. At length my eyes focussed on the Thessaloniki magistrate’s court not fifty yards away, and I saw a large angry crowd jostling against a hard wall of riot police and army personnel. There was a tangible tension in the air, even from my lofty viewpoint. The crowd rallied. They surged forwards against the silent black line. They were repelled. This cycle was repeated for a time, until three official looking men emerged amidst roars and jeers to address the throng.  Whatever was said seemed to have a deflective effect, as the group re-organised in the form of a march. Their shouts gradually faded as they turned the corner, leaving me with a breakfast for thought, and a lingering sense of sadness.

Greece is a favourite topic of the media at the moment, and rightly so. Having heard so much about the current difficulties, I was looking forwards to the prospect of being able to form my own perspective. Even better, Dan’s girlfriend Alki and her family were to welcome us in Athens. They were able to give us insight into the local people. Discontent is evident even to the unobservant, with political flyers and graffiti widespread even in rural areas. Public transport and bicycling has seen a new resurgence. The affluent areas of many Greek towns now boast a multitude of empty neglected buildings, some completely derelict. Given that two thirds of Greece’s 11 million people have clustered into its cities, this dilapidation is a worrying sign.

We travelled hard and long to reach Athens, our arthritic engine straining against a hull devoid of any aerodynamic concept. Evidently wind resistance wasn’t much of a concern to the be-wellied Land Rover designers of yore. One of the most concrete deadlines of our trip was all too big in the window. For Dan, arriving late to meet his girlfriend at the airport was unthinkable. She was flying home from Australia after four months apart. Uncharacteristically, and despite Bass’ best efforts, we arrived early. Our timely arrival definitely wasn’t made possible by the delay in Alki’s flight…

What ensued was Greek hospitality at its best. Alki’s mother, Annie, had arranged an airy and futuristic flat for us bang in the middle of the city, and went to a lot of trouble to feed us Mother’s traditional home cooking. I watched with quiet awe as Dan engaged in a cycle of eat-until-you’re-full-and-have-your-plate-refilled which in true Mediterranean fashion lasted most of the day. Our thanks to Alki and her family for making our stay here amazing!

When Katy, a friend from Cornwall with huge charisma arrived, we were seven. We spent a pleasant evening in the cool Athenian air watching Dan running around like a hamster in its ball, trying to fit us and our luggage in/on our Landy. A childhood champion at Tetris, no one is allowed to interfere with this battle between man and the constraints of dimension. We generally leave him to it and try and employ ourselves in other manly activities such as kicking the tyres, and grunting about the local beer.

Somehow this impossible task was achieved, mainly to the further detriment of our aerodynamics, and we departed for Alki’s father’s house in the misty mountains of Paranasos. Off the main arteries Greece’s roads are poorly maintained, and we were glad of our ample suspension. We spent a wonderful few days in holiday-mode, exploring the area around Delphi on terrifying mountain tracks, and we were glad of our state-of-the-art power assisted brakes.

Sunrise: stowing our bags on the roof in preperation for a long drive

Our passage to Turkey was via the rural East of Greece. On this road, each kilometre takes you back in time by roughly a year – provided that you drive at 88 miles per hour – ending in 1952, give or take. Luckily our car is angular enough to look as though it has its origins in the fifties, so it didn’t look too out of place. Helped on our way by a number of caricatured wizened farmers astride their grandfather’s tractors, we eventually found our way to the delta of a large river. Here we made camp, and spent our time swimming and constructing a latrine with an impossibly complex trail of signs so that we could find it in the dark. Hobbling back from nature’s call bruised and scratched, I couldn’t help but think that a hundred paces in any direction before doing my business might have been a better solution.

The sun awoke us bright and early, and we were on our way, towards the border and the Bosphorous. Despite the troubles, we had a fantastic experience in Greece, and we really hope that a solution can be found so that this wonderful country can turn the corner towards economic recovery.