Many months later, fleeing from the dark, we would remember these dazzling steps along a sandy ridge in the Sudanese desert. At midday we had tramped away from the quivering road to an old fort on the dunes. Among the crumbling ruins we found a hovel concealed in the shadows of the fort’s walls. A man clothed in rough cloth became visible in the doorway; he beckoned us inside. Slowly, hibiscus tea simmered on coals and he watched us. He murmured gently as it boiled, “on your road you have a danger, you have to move as one.” He said, “you see it first and run. Before the time to chase, you run, all in their place and all eyes forwards.” The hermit hissed as he spoke. Quietly finishing our tea, we spat back the hibiscus petals that fell into our mouths. We did not make sense of the man’s words until the day we were chased. 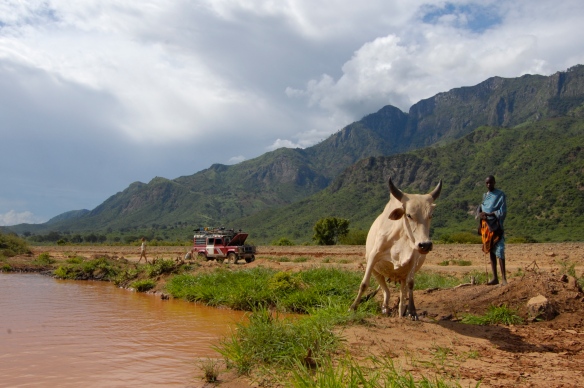 Tanzania was in bloom as we crept up behind the lonely blue hulk of Kilimanjaro. The rocky Mwenzi peak looked like the prow of a great ship, wrecked on an atoll in a wide green sea. A smattering of snow at the summit was a rare and melancholy sight, simply because it bears such cruel comparison to Hemingway’s“impossibly white” mountain of a few decades earlier. In Tanzania the borders of game reserves are less well defined than in Kenya. Elephants scuff the bark from the trees at the side of the road and impala flee, bouncing across the plains, from the roar of our engine. We found our camps by pushing a path from the road into the 10 ft elephant grass to fall asleep with the rustle of crickets and the barking snarl of leopards. At Lake Challa we climbed down 100m of steep jungle to jump from rocks into splendid blue water in the crater. In Moshi we tried to sell our old tyres. We were discovering that they were worthless, even in Africa, until we met a man plying a trade in recycled shoes made of tyre rubber. This was particularly opportune as Bas was woefully undershod subsequent to a disastrous flip-flop blowout a few days earlier.

In the sparsely populated interior of Tanzania, our route took us through several vast national parks, this gave us all a great sense of moving through the real Africa, the wild, empty Africa of Livingstone and Stanley. We traversed hundreds of kilometers of green bush, red dirt and sunsets stained violet by the rising dust. In the Mikumi national park we came across a male water buffalo grazing a few metres from the road. In person they are enormous, like a huge cow, reinforced for Africa, with heavy crescent horns and a square frame of thick muscle. Rich got out of the car to photograph the placid animal when another, very different, bull arrived from the bush. The second had a broken horn and a face covered with scars and bitterness. He took an immediate dislike to Rich and dropped his head low to scowl through his thick brows. We shouted to Rich to get back in as the animal was clearly spoiling for a fight. While buffalo damage to the car might be a fun story, buffalo damage to Rich would be difficult to explain to his mother. Rich could not reach his door so leapt onto the back ladder and scrambled into the window as the bull feinted a charge at him. 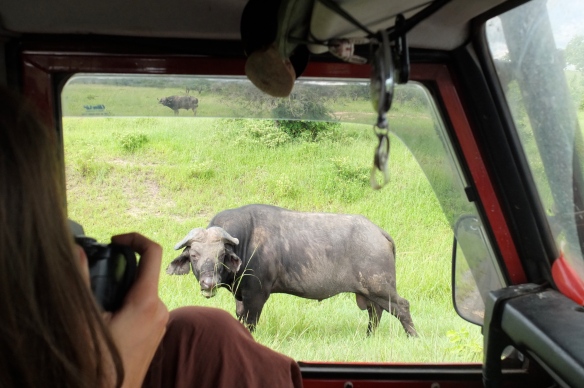 This was an incident that prompted the development of a system for unexpected hazards. Should we need to get out of a situation quickly and someone is trapped outside the car they must climb to the roof, rather than gamble on the temper of any of our fickle door mechanisms, and then slither down into a window while the driver makes good the escape.

We have a system for communication from the roof as well. This was developed after a surprise elephant encounter in thick woods (the person on the roof had no means of telling those in the car that they were eye to eye with a grey wall of angry wrinkles).

When parking Tess we have learned a rhythmic tapping system from a pair of parking wizards in Istanbul. This has now been expanded to include other signals. Two taps for stop, three taps for go, and a continuous frenetic rapping for “an elephant is about to pull my head off!”.

We have many and varied systems for coping with the problems that have arisen so far on the trip. One is a system of co-piloting Tess in the worst of off-road conditions. The navigator uses a map and an old shabby sat-nav with an African tracks program to give the driver real time guidance on the contours of the road ahead. We have a code for communicating the location of approaching holes, rocks, mud, deep sand etc. The system allows us to effectively use six eyes instead of two to scan the road ahead. In addition to saving us from several catastrophes when we had no head lights the “six eyes is better than two” approach allows us to pretend we are racing in the (as yet un-realised) Cornwall to Cape Town Rally. 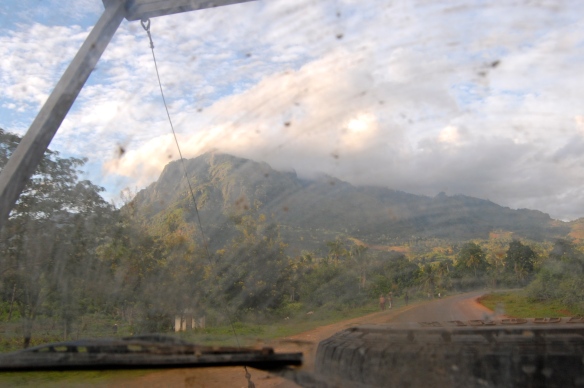 Before leaving Tanzania for Malawi we visited Ruaha national park. As we arrived the sun rose over a hill and shone silvery on the surface of the river. The waters of the Ruaha wind long loops among giant granite shards that burst roughly through the rolling green landscape, polkadot with Baobab trees. Being off-season and fairly remote we had the park to ourselves. We lost the day following elephant and antelope over some of the most breathtaking scenery we have encountered on the trip so far leaving the park long into the greying twilight. 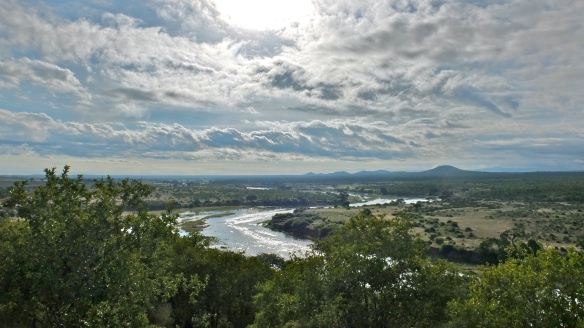 Conversation bubbled through the car as we rumbled along the ruined track away from Ruaha. A few kilometres from the park gate we came across a pickup flashing it’s hazard lights in the narrow track ahead. Our voices lowered as we noted that there was no way past them. We could not think of a reason for a pickup to be on this isolated road and car-jackings being prevalent in this area, we paused a hundred metres short to investigate. I took the binoculars from the dash and focused on the distance. “There are a few men standing around the pickup, they have guns!”

Bas pointed out calmly, “everyone has an AK here that doesn’t mean very much”. “True” I replied, “but this is different, they aren’t slung over the shoulder like a rusty farm tool, these are on a short strap across the chest, and their hands are on the grips”

There was a hush in the car. “We should wait a little, to see what unfolds before we approach,” said Rich “Maybe turn the car around incase we need to get out of here quickly.”

Bas got out to help Rich to turn the car without dropping a wheel into either of the ditches running along the sides of the dirt track. Tap tap…tap tap…tap tap…TAP. “That is enough we will make it around”, said Rich.

Bas crept down the track to check on the pickup again. As soon as he raised the binoculars he started shouting, “they have seen us turning, they are after us!” At that moment the distant engine snarled to life and began burning towards us in a cloud of red dust.

Bas ran back down the track towards us, “go go go they are coming.” He leapt onto the ladder at the back and beat out the emergency rhythm on the bodywork to show he was aboard and we should bolt. As we gathered speed on the rough ground Bas scrambled up onto the roof and held tight. He cast a backward glance at the headlights that cut a swathe through the darkness behind us then slipped in through the passenger window.

The track flew around several bends and straightened. Rich threw a furtive look back in the mirror. The lights were gone. They must have given up. Maybe they knew we could not go back through the park gate. We were penned in. We consulted the map and found an older route away from Ruaha Park. The old road returned to the main track after 60 km. We had to take the old road and hope that we could reach the junction faster than they could or they would head us off. Minds set, we raced away though the high grass and low branches; this path had not been used in a long time.

Our spotlights shone a yellow corridor in the obscurity. Rich drove among the potholes and corrugations faster than we had ever dared before. The only sounds in the car were the raking branches, spitting stones and barked instructions. “Pothole 1…Rut running 2 to 3…Wooden bridge 300…Wet ford 100m”. My heart was beating tight as a bowstring as we approached for the crossroads.

For 90 minutes we drove, all eyes pinned on the road ahead, Hole 1 to 2, Rock 3, All silent. All stock-still. The sound of the car shaking itself apart on the ruined road jarred. Rut 3, Rocks 2 to 3, Ford, may be wet

We peered into the distance, eyes bloodshot now from staring, the junction appeared. It was dark, too dark to see if anything waited for us there. We approached at ramming speed and skidded through the junction without stopping. No one saw the pickup, but who could say in the dark. We drove on for five kilometers, regularly scanning the mirrors, nothing. Still not safe, but we were forced to stop for respite. Rich’s white fingers were peeled from the wheel and he was thrown in the back to recover. It was another hour before we reached the nearest town. Lights and people, at last. The tide of adrenaline receded slowly over a jittery beer and we collapsed into a motel to sleep.