Man vows to marry mentally challenged woman after raping her 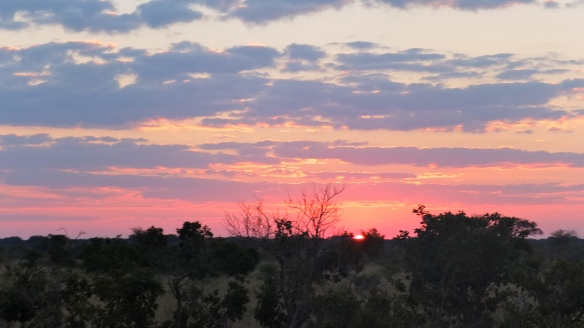 Our decision to drive to Harare by night paid off and we arrived on the outskirts in the small hours. The street lights were dazzling after the deep, rural darkness. The Rogers had told us about a park that allowed campers. This information was at least seven years old but we headed there anyway with little in the way of a plan B. We were tired and becoming short with one another. A silence replaced the previously cheerful conversation. The following hour of wrong turns and U-turns tested us further. The campsite was nowhere to be found. Eventually we decided that a gated building-site with the remnants of a communal garden were our best bet. There was no one in sight so we decided to put a tent up and try to explain ourselves in the morning. We were promptly ambushed by three police officers.

After patiently explaining our situation to the startled guards, who had been patrolling the area, everyone calmed down. It was agreed that we were to stay and wait for the boss in the morning. We were so tired at this point that we would have accepted a night in a prison cell.

The next day we met the boss, who opened introductions with a jokey,

His candour was refreshing after last night’s lengthy admonishments. Within minutes of straightforward business we were free to hit the town. 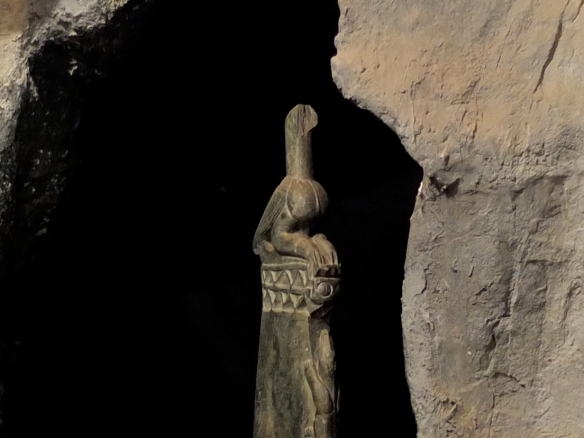 On the surface, the Harare was functioning. Dollarisation had come in to remedy the astronomical hyperinflation of the Zimbabwean dollar. The Z$ had essentially been abandoned in 2009 when the government legalised foreign currency transactions whilst at the same time limiting cash withdrawals to 100billion Z$ (far less then the value of a loaf of bread). Inflation at this point was around 96% a day with extra zeros continually being added to the bank notes.  US Dollars were fine for big purchases but life became difficult with change as there were only grubby dollar notes in circulation. South African Rand were sometimes used but more often than not the retailer would try and offer something of a similar value. A parallel system of barter had evolved. This lead to some complicated situations, such as me trading a pen to photocopy my passport and upon protesting that the pen was worth more than the photocopy, receiving my change in chewing gum.

We spent the weekend in Harare, meeting people and organising our onward travel. Priority number one was, as always, to set up a base and get clean. Out in the countryside our grubby appearance fitted but now we were amongst business men, diplomats and politicians in shiny, shiny suits. We dug out what ‘smart clothes’ we had managed to preserve. At last, Dan put some shoes on and combed his beard but remained in his old scrub trousers as he had no others. It would have to do.

In a leafy hostel near the Zanu PF party headquarters, we met the few intrepid travellers who had made the leap of faith up from South Africa. We pitched our tents in the garden. Over an evening the group increased. Introductions were made in the easy way that people who are mutually far from home are able to do. We spun a few of our well rehearsed yarns and soon we had all been invited to an exciting event.

On the other side of town the Zimbabwean Red Cross were having a fund raising concert in the -now disused- Mbare netball stadium. The huge concrete structure was testimony to the fact that Zimbabwe had once been a big player in international sport. Here, despite the nations economic problems, the great and the good of Harare were gathering to raise money to support the charity at home and abroad. Some of the evening’s big hitters included Fungisai Zvakavapano-Mashavave, Tryson Chimbetu, King Shaddy and my personal favourite the Dembo brothers; struggling to make a name for themselves in the shadow of their recently deceased father, the legendary Leonard Dembo.

The evening was electric. Students, professionals, musicians and crowded in around bars and flaming braais. We were warmly welcomed. Up on stage each act gathered the crowd up to dance along. The Dembo brothers’ band in particular had lengthily and complicated dance routines to accompany their 20 minute songs. They had a classic Southern/Eastern African style with a syncopated easy rythm, a bouncing slightly independent base overlaid with joyous, melodic guitars and harmonised singing. How they were able to co-ordinate all this, whilst spinning and jumping in perfect unison, is totally inexplicable.

We awoke the following morning groggy and aching from over enthusiastic dancing. With bags of clean washing and fresh supplies we packed up our tents and left the city in the direction of Great Zimbabwe. These ancient ruins from the 14th centaury had been known about since the early explorers. ‘Zimbabwe’ itself means ‘large stone house’ which doesn’t give much credit to the intricate, concentric fortifications. I had to admit that I had not heard of any ancient, stone buildings south of Ethiopia. The most amazing thing is how long the academic world was unable to conceive that the decedents of this great trade empire were the Shona tribe. Complex theories were conceived to attribute the ruins to the Arabs or the Phoenicians. With the Rhodesian government, these theories gained a political agenda. Suggestions that the site was constructed by black people (or even that the ruins existed) were suppressed. 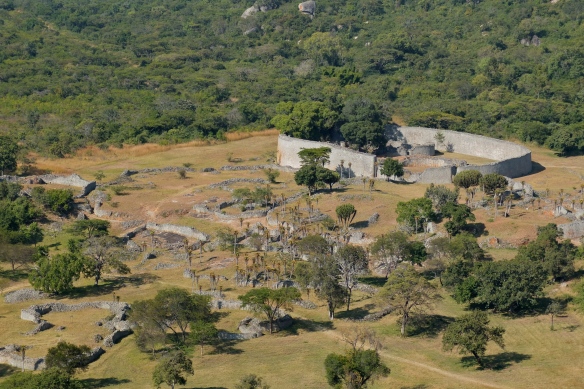 The city had reminded us of how much more comfortable we were camping out in the bush. That night we made supper in the shadow of the hilltop ruins. We had a single-malt and sat up talking for some time. There was a chill in the clear air that we were unfamiliar with. Our route was taking us south with the winter. We crawled into out tent to lie like sardines, neglecting to pack up the food and plates. We rose early the next day, but not as early as the monkeys who we found industriously and systematically ravaging out campsite.

From Great Zimbabwe we drove in an arc, through the Indebele tribal heartlands (the other main tribe of Zimbabwe of Zulu origin) and the city of Bulawayo. Dropping away from the central Highveld, the Western edge of Zimbabwe seemed to be an endless forest with little sign of occupation. At night we would drive for hours without seeing the lights of civilisation. Our destination was Hwange national park.

We reached the official edges of the park at the dead of night, although it seemed we had been in wooded wilderness for hundreds of miles. The forest was thick where we turned off to make ourselves invisible for the night. By spotlight, with the engine turning over slowly in low range, we wove our way through the trees, stopping occasionally to hack down a branch or trunk that blocked our path. The signs of Elephant were everywhere. Splintered wood and ripped bark were scarred into the forest as well as mounds of dung in various stages of returning to earth. That night, the still air was alive with noises. I sat on the roof and listened to the yelping jackals and a howling lament that we later learned to be from the painted dogs. Occasionally there was the undulating peep of a Hyena contact call.

This had become a night time ritual. We were comfortable in our constant vigilance. Camped on the forest floor, it was hard to go to sleep. Eyes closed, I placed each sound into a mental landscape; from the distant crashes to the sharp snaps that seemed inches from our resting heads. We strategically placed knives, clubs and machetes around the tent in case the worst came to the worst but mostly, we relied on hiding.

I seemed to be the lightest sleeper. Rich, who was still suffering from hearing difficulties from his Kenyan ear infection, was the heaviest. In Kenya I had hunched in moonlit terror as a bull Hippo roared and munched its way through our camp as he had dosed serenely. In Mozamique we had all lain awake in our thicket, listening to the nearby drumming and chanting that started up in the small hours where before we had been certain of our solitude.

Nothing however compares to the visceral, sinking realisation that upon waking, somebody is slowly, with patient stealth, unzipping your tent.  This had happened, only once in Tanzania. At 4am in the morning, in a forest camp. Without moving, I slowly woke up as the sound of the zip filtered into my consciousness. What must have been an opportunist thief, ceased his work, when I turned my torch on, only to blind myself on the flysheet. I went back to bed assuming I was hearing things, but then I heard the chains of the car being slowly examined. I grabbed my baseball bat and hesitated. The sounds stopped. As the silence continued, ringing in my ears, I began to doubt myself. Five minute later, I heard more shuffling and Dan’s semi conscious voice mutter a confused,

At this point I gathered the courage to leave the tent with head-torch and cudgel in hand. My narrow beam did little to cut through the encroaching night. The flicker of movement seemed to vanish behind every tree just before my torch fell on it. By the time a stern faced, boxer-short-clad Dan appeared, axe in hand, it was clear we were alone again. The only sound was Rich’s peaceful snoring. 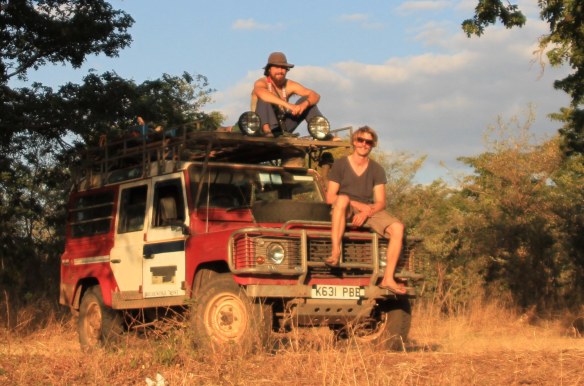